The Waddling Dead: Episode One 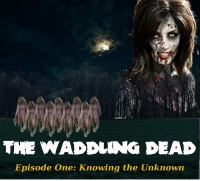 Episode One: Knowing the Unknown

Britney sat perfectly still, her knees bent and her feet flat on the edge of the seat.  With her arms wrapped around her legs, she rested her chin on her knee caps.  A lot was going through her mind just then, sitting in the second seat back in that 10-passenger van.  But the one thing that wasn’t going through her mind was how in 3 days’ time, her entire world would change.  And life as she knew it would never be the same, not for her or for any of the other seven pledges in her sorority class who were in that passenger van with her.

Sitting in the seat in front of her were Brooke and Angelina.  Sitting next to her was Yolanda, a student from Brazil.  In the seats behind her were Georgia, Iris, Rebecca and Lorna.

Together, they were The Eclectic Eight, the current pledge class of the Beta-Alpha-Beta sorority chapter at St. Mark College in upstate New York.  This was the final week of their pledging period, a span of time that had lasted a month – not just a week.  And for this, their final weekend of pledging, they were being taken to a hole-in-the-woods campground that had been recently purchased by a member of the very first Beta-Alpha-Beta sorority class of 35 years ago.

Beta-Alpha-Beta was not an easy sorority to get into, but it was the one that all the girls wanted to be a part of.  Their house parties on campus were legendary, with lines of people that were longer than the sorority block.  There were more guys at those parties than guys at fraternity parties.  The booze always flowed easily.  Modesty and discretion were thoughts of the past and every girl on campus wanted to be a Beta-Alpha-Beta sister.

The eight that were chosen for the current pledge class were hand-picked from 135 girls who had applied.  So, being in that passenger van as a current pledge was an honor and a gift.

Beta-Alpha-Beta had a very simple yet effective mission:

“To cultivate and encourage scholastic and ethics while promoting self-worth in every sister.”

But their methods of achieving this mission, especially the self-worth part, were a bit unorthodox.  They would break a girl down, robbing her of all self-esteem – then to rebuild them back up … the Beta-Alpha-Beta way.  No, this didn’t turn the girls into drones.  Instead, it taught them to rethink what their own self-worth was about.  Insecurity often hampered a girl’s self-esteem.  Competitions could prove damaging.  Ridicule during upbringing often kept a girl’s shoulders slumped and her chin lowered.

So, instead of helping their pledges with moral boosting counseling, to overcome their issues, the sorority chose to remove those issues for them – implanting the seed that every girl was unique and powerful.

That 10-passenger van was currently sitting at the far end of the parking lot of The SmartMart a few towns away from campus.  Smartmart was an enormous 24 hour one-stop shopping store.  It had everything that could possibly be needed.  And also currently, Sherry and Chloe – their two pledge mistress sisters – had gone into the store … saying they would be back soon.

Sherry and Chloe had put the pledge class through some heart-pounding trials during the past month.  So the girls in the van feared the worst of what might well be the present case for them in just a few minutes … perhaps being paraded through the store, a scenario that would be never forgotten.  After all, the eight of them were dressed in a attention-getting manner.

All eight of them were wearing Beta-Alpha-Beta t-shirts, earrings and white … disposable …thick … crinkly diapers.  They all had sandals on their feet and all had pacifiers in their mouths, the pacifiers being attached to strings-n-clips – the clips being attached to the collars of their t-shirts.  The t-shirts were tight, having halter support.  And therefore, none of them were wearing bras.

They looked like adorable little BabyGirls.  In Beta-Alpha-Beta, no one was ever called a pledge – though they were in fact just that.  Instead, until they became full-sisters, they were called baby sisters.

And the sorority played this name up, to the fullest.

For their final pledge weekend excursion to a campground in the middle of nowhere – where other Beta-Alpha-Beta chapters were also sending their current pledge classes, the girls were allowed to pack a small backpack of personal items, but no clothing.  They would be wearing the nighties and diapers and t-shirts and other clothing supplied for them by the sorority.

When feeling nervous, the girls were told to nurse on their pacifiers until the trepidation passed.  They had been taught that most fear was derived from what was unknown.  And if the unknown couldn’t be discovered, then there was no reason to allow it to produce uneasiness.  The unknown would become known in due time.  And until then, being mindful but not worried was the healthiest mental state to keep.

So all eight of them nursed rapidly on their pacifiers, hoping the unknown would soon become identified.  The silence in the van wasn’t helping, though.  So Angelina, the genealogy major and most outspoken baby sister of the class, spit her paci out to speak what was in her heart.

“Is anyone else getting ready to lose it right now?” Angelina asked with a trembling voice.

“Yep!” the others replied in unison, spitting their pacifiers out too.

“What is taking them so long in there?” Angelina asked with exasperation, looking out the window and across the parking lot to the entrance of the superstore.

There weren’t many people at the store just then, a truth that would prove helpful to them in just a few minutes.

“Did they even say why they were going in?” Georgia the pre-med student with a southern accent asked.

“Nope,” Britney replied, still keeping her arms wrapped around her legs in a tight ball.

“You okay,” Iris the architecture student asked Brooke – Iris also being the maternal one amongst them.

Brooke was the most timid of the group, having had the most difficulty letting go of her pre-conditioned mind and embracing a new sense of self-esteem.  But there was a reason for this.  She was incontinent and had been so her entire life.  So diapers were nothing new for her.  But the pacifier was.

“Here,” Iris said, motioning her hands to Brooke.  “Come back here and sit on my lap.  It’ll be okay.”

Brooke got up and crinkled her diapered waddle back to Iris, sitting on her lap and curling up into the fetal position as she nestled herself against Iris’s torso.  Iris wrapped her arms around Brooke and ever-so-slowly rocked her back-n-forth while patting her diapered bottom.  This was a nurturing experience shared with each other from time to time, a much-needed bit of relief from the pledging undergone together.

“So is anyone dreading this stupid weekend camping trip?” Rebecca the music student asked with disdain.

“It could be a very wonderful weekend,” Yolanda the Brazilian student asked, always looking for the positive in everything.  “We just need to give it a try.  It could be really good for us.”

“I hope they’re keeping diaper rashes in mind,” Lorna the criminal justice student said with a giggle.  “Does anyone else’s butt feel like a million degrees right now?”

Everyone in the van laughed.  It was very true.  The diapers kept heat well, very well.  But they all had been powdered heavily.

Britney listened to them talking, how some of them looked forward to the weekend to come.  Other were apprehensive and fearful about it.  Some were talking it out and finding hidden value in the experience.

The truth was: the entire pledging month had been one mysterious event after another, yet every time – the end result was not only pleasant but also meaningful and self-esteem boosting.  So there was no reason to believe that this camping trip would be any different.

Just then, Sherry and Chloe reappeared, Chloe sliding open the side door of the van.  Everyone jumped and then quickly put the pacifiers back in their mouths.

“Good,” Sherry said, then looking at the group.  “There are no children in the store.  So it’s time.”

“Everybody out,” Chloe instructed.

Everybody out?  Did they mean to actually take the baby sisters into the store?  So much for relaxing through nervousness.  Hopefully, they wouldn’t wet themselves from fear.

Continue on to Episode Two

30 responses to “The Waddling Dead: Episode One”