The Point of No Return (Part Two of Two) 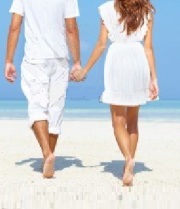 The surest path to loving someone else is to first love yourself.  But how do you convince someone to love themselves if they can no longer do it on their own?

If you were given one chance to pull someone back from the brink of their own collapse, what would you say to them?

Would you be strong enough to take a journey beyond yourself, to find her soul and bring her back?

Zeke learns of the journey he must make in order to bring Lily back from the threshold of her own destruction.

The Point of No Return – Part Two

(Start with Part One)

Zeke followed after her and they entered into the trees, exiting into the edge of the CountrySide where Mr. Woody and Neph, two other dream elves, were waiting.

Zeke looked straight ahead to the Pearl Lake seeing Lily sitting at its edge.  He began to move towards her when Neph stopped him.

“Ye need te understand dat LilyGirl doesn’t know who she is anymore.  Her mind is on de edge of life an’ more fragile now den ever before,” Mr. Woody explained.

“Skip ahead to the part where you tell me what I need to do,” Zeke said impatiently.  “Do I need to go over there and remind her that she’s Lily?”

“Ye need te do more den dat.  Ye need te convince LilyGirl dat her illness is not her fault an’ her frailty will not prevent her from havin’ children,” Mr. Woody answered.  “If ye bring her back te life without first banishin’ de guilt from within her, yer LilyGirl won’t ever be de girl ye fell in love with.”

“So long as I bring her back, I will love her no matter who she becomes,” Zeke answered.

“No,” Zeke said, beginning to realize how severe of a state Lily’s mind was in.

“Zeke,” Mr. Woody said, sitting next to him.  “Only ye can convince her te love herself again.  Only ye.  She needs ye te save her soul.  Anything less in unacceptable.  I’m sure ye agree.”

“I do,” Zeke answered solemnly.

Zeke stood up and took in a deep breath.

“Because she won’t believe ye.  An’ I don’t hev anymore advice te give ye,” Mr. Woody said, resting his chin on his hand.  “She doesn’t know who she is.  She hates herself.  She blames herself fer her illness an’ de only thing thet can change her mind about any of dis is a connection of souls dat only ye share with her.”

Zeke looked over at his BabyGirl, sitting next to the water’s edge and dragging her fingers through the water, making ripples in it.

Zeke slowly turned back around and began walking towards Lily at the water’s edge, realizing that without her, his life would have no meaning.  Not only would he be saving her life, but their child’s life as well.

“How is he going to save her, Uncle?” Neph asked.

“He doesn’t understand yet dat he can’t save.  Not in de way he’s gonna try,” Mr. Woody replied.  “Dis is all about givin’ him an opportunity te say goodbye te her.”

“If anyone can remove the confusion in Lily’s mind, it’s Zeke,” Aria said, embracing Neph’s chest.

“Zeke isn’t perfect,” Aria responded, watching Zeke walking towards Lily.  “But it’s his imperfections that make all the difference.  He knows no limits.  And if he can’t save her, then he’ll join her – and wherever they’re headed, they’ll be together … For the Long Haul, as he would say.”

Aria placed her head on Neph’s chest as the three of them watched patiently.  It was all in Zeke’s hands at this point … The Point of No Return.

.
The Zeke and Lily Saga

Also attached to this series is: Aria and the CountrySide

Taking place simultaneously with the end of book 6.

And: The Story of Lucy

If you like Zeke and Lily’s saga, I would also recommend:

The Mia Series and The Country Rose Series