“I Can Not Go To School Today…” (Part Two of Two): Lies Catch Up With You … In the Enema 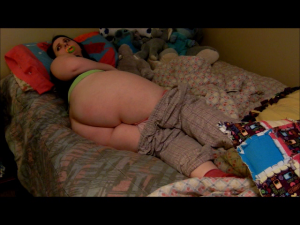 Sometimes the only way out of a lie is to not get out of it at all. And though, we may be strongly against the treatment we receive, the fact remains: There are consequences for our actions and our words.

But perhaps the greatest danger is beginning to believe the lies we tell as being the truth.

For Avery, this was not going to be the case … not if her Daddy had anything to say about. And as this fibbing little BabyGirl would soon find out, Lies Catch Up With You … In the Enema.

Warning: This is Adult, Baby! ABGussy.com

Despite the baby treatment, Avery had gotten her wish.  She was fast asleep well into the morning, didn’t have to go to school and she thought she had outsmarted her Daddy.

The diaper wasn’t so horrible to be wearing.  It actually kept her bottom warm.  But what she didn’t know what that when he called her “Baby”, he truly meant to treat her as such…

The overhead light flicked on and her Daddy walked in, but she didn’t budge an inch out of slumber.  Not until he began taking the covers off of her.

“Nap time is over.  Did you have a good nap?  Hmm?,” her Daddy asked, peeling the covers off her legs and patting her diapered bottom.  “Did you wet your diaper?”

“What?” she asked, perplexed by his question as she turned over onto her back and looked up at him.”

“You actually want me to use them?” she asked in disbelief.

Avery groaned at the thought of it.

“You’re in diapers now and you’re going to use them like a baby,” her Daddy explained gently, patting her diapered bottom.

“But what if I don’t want to?” she asked in a whiny, pouty voice.

“And that’s what you get for lying about being sick,” her Daddy said, not letting her off the hook.

It seemed as though she didn’t really mind the fact that she had lied to her Daddy.  And she also didn’t see the possible problems lying could cause in her future.

But her Daddy understood where lying could lead her to and at the moment, she hadn’t gotten the message:

There are consequences you will face for your actions and your words.

Being a Daddy wasn’t easy and there were times, like right now, when he needed to teach her a lesson.

“And I don’t wanna use them,” Avery added.

“Why not?” he asked, unfastening her diaper tapes.

“Because I’m not a baby!” she whined more sincerely.

“You are a baby,” he said, walking over to the dresser.  “And since you’ve made clear that you don’t want to use them, now … you’re going to have to use them.”

“Oh Yes,” he insisted holding up a red rubber ball with a funny looking white plastic tip on it.  “Do you know what this is?”

“No,” she answered, not really wanting to know what it was, but certain she wasn’t going to enjoy it.

“What this is … is an enema bottle,” he said, parting her thighs and gently inserting the plastic tip into her bottom.

He squeezed the red rubber ball and she quieted down, feeling the fluid entering into her bottom.  Her Daddy’s tone became very soft and very gentle.  He realized the initial reaction anyone would have to receiving an enema.  It was one that got complete attention.

And that was the idea.  If Avery was going to listen and learn from her deliberate mistake of lying, then she would be made to do so.

The point he was making to her was that lying would always be unacceptable.

He continued to talk softly to her as the fluid began working inside her.  Defiant as she was still being, it wouldn’t take long for her to realize that “control” was no longer in her

“When you act like a baby, you get treated like on,” he said, continuing to address her fussy attempts to prove she was innocent.

Tucking her back into bed to continue her nap, he turned off the lights and exited the room again.  Avery fidgeted under the blanket, but in a short while, would come to understand a whole new level of fussiness, pouting, whining and whimpering as soon as the enema took full effect.

Like it or not, she was going to be using the diapers, after all.

You can find the video to this story at:

One response to ““I Can Not Go To School Today…” (Part Two of Two): Lies Catch Up With You … In the Enema”